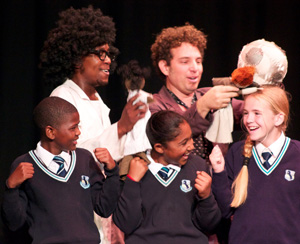 Falling Moon/Vallende Maan is a compelling, adventurous romp through the Karoo with a delightful team of three misfits, trying to find their way in the world. They face one tremendous and seemingly insurmountable problem: the moon has fallen out of the sky. What is to be done about it? Who will decide the moon’s fate? Whose opinion matters more in making important decisions – the voice of science and reason or the voice of business and economics? And what of imagination and creativity? Is any one person’s perspective more important than another’s? The three characters set off on a quest to solve this problem.

A play about the strength of diversity, Falling Moon/Vallende Maan is an interactive play that involves the audience from the outset and requires the audience to facilitate the storytelling. Themes of intercultural communication and environmental awareness are explored on this symbolic journey of three characters, which are very different in many ways. A cast of 4 actors, from culturally diverse communities, uses visual theatre, puppetry; movement; mime; music; clowning and a mixture of languages.

“The children thoroughly enjoyed this interactive, musical show. Well worth it. One child said it was the best show they had seen.” Bay Primary School

Falling Moon/Vallende Maan was workshopped by Jungle Theatre Company under the direction of Jaqueline Dommisse in 2007 with two then trainees Unathi Speelman and Marika Williams. It premiered at Out The Box festival under its working title One the same year and returned as Moon In The Sky in 2008. The play was also rolled out as a twinnings intervention for schools in the south peninsula and Cape Flats at the Masque Theatre Muizenberg, as well as community performances in the local informal settlement Vrygrond at the newly built Capricorn Primary School. In 2012, it was translated to be a predominately Afrikaans script and recast for the Klein Karoo Nasionale Kunstefees as Vallende Maan. The play continued to the Nieu Bethesda festival and a primary school twinning programme at the Milnerton Playhouse. In 2013 Vallende Maan was performed at Artscape Arena and Falling Moon was part of the ASSITEJ Family Venue at the National Arts Festival.