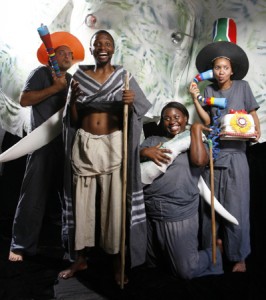 Kama Indlovu holds the key to the elephant world. He discovers three very different children fighting about elephants. !Kama takes them on a journey into the mysterious origins of Indlovu People. Through magical puppetry, catchy music and comedy, the children’s relationship with these majestic creatures is changed forever.

Indlovu People reflects upon the history of conflict between humans and wild animals in man’s quest to dominate the earth. It reveals a violent history with the rise of the poaching trade and impact of fencing in animals that know no borders. It offers practical ways for everyday people to uphold the ban on the ivory trade.

Indlovu People is 45 minutes in duration and is suitable for Grades 4-9. An accompanying drama skills workshop is also available.

“This show shows the importance of understanding what is important to other people, their needs & wants. Any effort made to change this is extremely laudable.” Parkvale Primary School

Indlovu People was commissioned by International Fund for Animal Welfare in 2008 as part of their Elephants Secure Habitats programme to raise awareness about issues surrounding elephant management in Southern Africa. The play was created under the direction of Stuart Palmer for schools’ twinnings run at the Baxter Theatre in May 2009. Heather Mac joined the team as guest director and adapted the play which then ran at Out The Box festival and National Arts Festival in 2010 where it was part of the Cape Town Edge programme. A reduced play was performed at Voorkamerfest the same year. The play was resurrected with a focus on poaching and the illegal ivory trade, for a schools twinning programme run at the Milnerton Playhouse in April 2013.