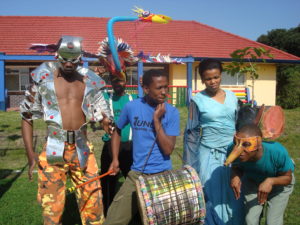 Sometime in the future the earth is one mega city ruled by Robot. A tree is captured by Robot’s slaves and locked in a tower. The Jungle Spirit is dying and her last hope is to appear in the dreams of ordinary people.

A storyteller uses traditional Xhosa intsomi technique to convey a tale about the importance of trees and urban greening for the well being of all. With nature as a source of inspiration for art and music, different cultural styles are made accessible through the disciplines of music; mime; puppetry and storytelling evoking the feeling of freedom and developing the imagination.

The audience takes part in creating the event as well as being directly involved in the action of planting a tree – a living memory of the event and the responsibility of its survival handed to the community.

Jungle Jive is 45 minutes in duration and is suitable for Grades 4-9. It is accompanied by a tree planting and a drama workshop is also available.

“Dynamic show with professional performers, learners were given an exposure to the theatre etiquette.” Zonnebloem Boy’s School

Jungle Jive was created in 2001 and rolled as a sub-autonomous project with Abalimi Bezekhaya between 2002 and 2003 to over 40 schools and communities. Jungle Jive continued to tour schools in 2005 with continuation funding. The play was revived by the 2007 trainee team and was performed for the Youth Environmental Schools’ Arbor Weeks in 2007 and 2008 and toured extensively in the presidential poverty nodes of Khayelitsha and Mitchell’s Plain in 2008. In 2012 it enjoyed a tour in Overstrand hosted by Whale Coast Conservation and was performed in Stellenbosch for National Arbor Day.