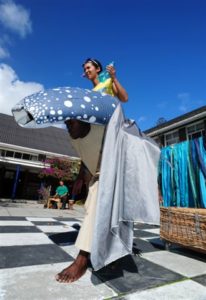 A girl discovers a world under the sea as she rides on the spotty whale shark, chats with the clever hammerhead and sings with the colourful cat shark. But danger lurks around every corner and she learns some of the secrets of the deep.

Partly based on Lesley Rochat’s ‘Sue Finds Happy Eddie the Shy Shark’, Shark Dreams tells a local tale about a girl Thandi, whose love for the sea takes her on a magical shark adventure. Shark Dreams showcases the many different types of sharks and educates young people about ocean and beach safety including: the role of the shark spotters in protecting beach goers; the meaning of the flags on the beaches; critical safety tips when swimming and using the beach. The play creates understanding and awareness about the important role sharks play in marine ecosystems as a keystone species and dispels myths created through misinformation and hearsay.

Shark Dreams was created in 2009 in conjunction with the Save Our Seas Shark Centre for City of Cape Town’s Environmental Resource Management Department’s Youth Environmental Schools (YES) programme. Shark Dreams was rolled out as an outreach programme to schools in Cape Town’s south peninsula; performed for World Environment Week and Marine Week in 2009 as well as the Blue Flag Beach campaign in 2010. The AfriOceans Conservation Alliance has also provided funding for community and schools outreach performances. Shark Dreams has also been performed at the Marine and Coastal Educators Network conferences where it received a standing ovation.